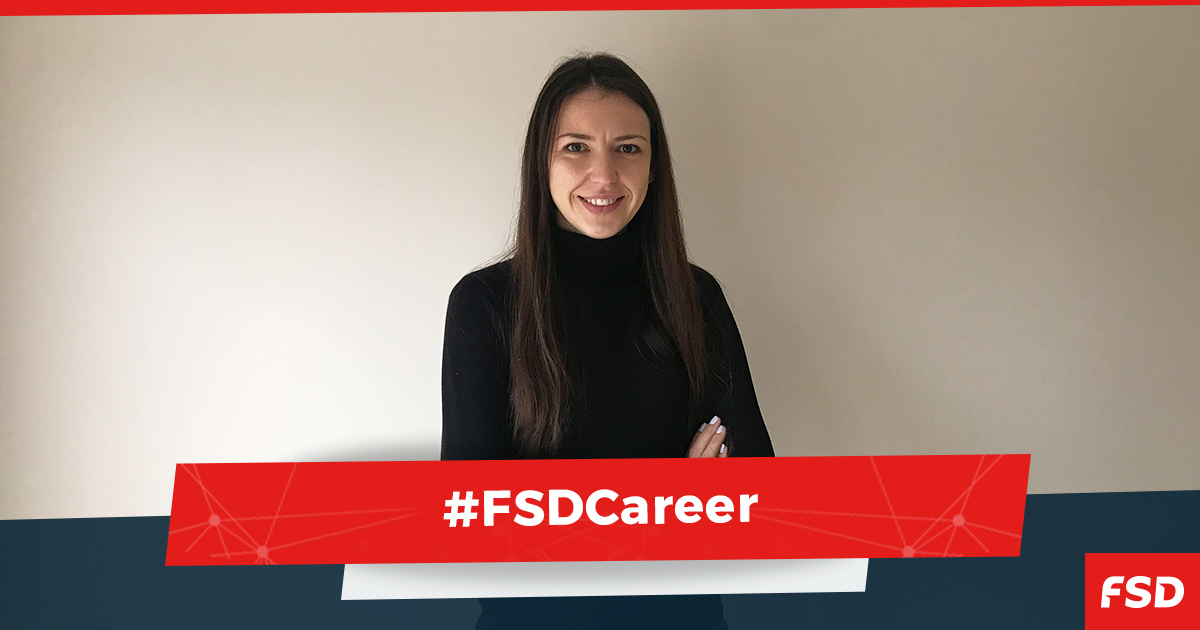 This month we prepared a text about a change of heart; that is, how it actually looks like when somebody changes their professional interests by starting developing their skills in almost completely different direction. This is exactly what happened to our colleague Tijana Janjić, whose current position fits her much more than she could ever imagine.

Can you briefly present to us your history at FSD?

I started my career as a Junior Project Manager where my main task was to write documentation for the original version of the E-commerce system. Also, I did my best to keep up to date with software development in accordance with the functionalities back then. While waiting for the developers to finish their work and as the software didn’t go live at the moment, I had enough time to further educate myself. I was first tasked with designing wireframes for one of the topics of e-commerce. While working on this, I was first attracted to design, and it was only afterwards that I wanted to question myself if I could actually code. As I learned the basics of HTML and CSS at college, I took advantage of my free time to brush up on my skills in order to broaden my knowledge and realized little by little that this was still my cup of tea. And here I am now in my current position.

How did FSD attract your attention in the first place?

In the first place I went for a job interview for the position of a Project Manager of the e-commerce team at FSD. I was very attracted to the fact that FSD was developing its software at the time, which I used to do in my master studies, as well. Specifically, at the time, I devoted most of my time to writing a master's thesis, where the primary focus was BI research within different ERP systems, precisely those systems that FSD pioneered at the time. I really liked this because there was an opportunity for me to gradually get involved in the development of these types of software (from the point of view of management), in addition to e-commerce.

It is very unusual for a Project manager to switch to a Frontend developer position. What pushed you in that direction?

As FON (Faculty of Organizational Sciences) is a faculty that offers a wide range of opportunities, both programming and managerial, at that moment I was not 100% sure which direction I wanted to take to improve myself. Like most girls in IT, I didn't see myself in the developer world. I wanted my training to go in the direction of the manager, where there was always that connection with IT. When I started working, I was surrounded by developers, where I definitely realized that backend programming was not for me. On the other hand, I was strongly attracted to design and frontend development. First, I invested a lot of efforts to perfecting my knowledge of HTML and CSS, so that I would later start working independently on my first templates. My colleagues at the time working as Frontend developers helped me a lot by pointing to good practice as well as by pointing out the mistakes I made. During that time, there were some changes in the team, and I got the opportunity, with the support of my colleagues, to create the first e-commerce site. It was then that I realized that this was the job I was eager to do.

Do you feel more ‘at home’ in this role?

How much energy did you invest in fully adapting in this new role?

Like any position, this one requires the investment of energy for constant advancement and keeping up to date with technologies. At first, I was more than thrilled because I thought I had finally found myself. I truly believe that when you do what you really like, it has to be your most powerful drive, which at the end of the day doesn't even feel like wasting time or energy.

Do you have any piece of advice for people having second thoughts about career shift?

Yes, I absolutely think that people need to do the job they love, and that it is not a mistake to change a few positions in order to go to work every day with a smile on their face. I was fortunate enough to find myself in the same company, so my advice to all those who feel that they would like to do something else at some point, is that they should try to think outside the box and take advantage of the field they are already in. This is certainly not a waste of time, and maybe it turns out to be a future job of that someone, too.

You are subscribed to our Newsletter!
We promise not to spam you.