From JavaScript developer to Project manager 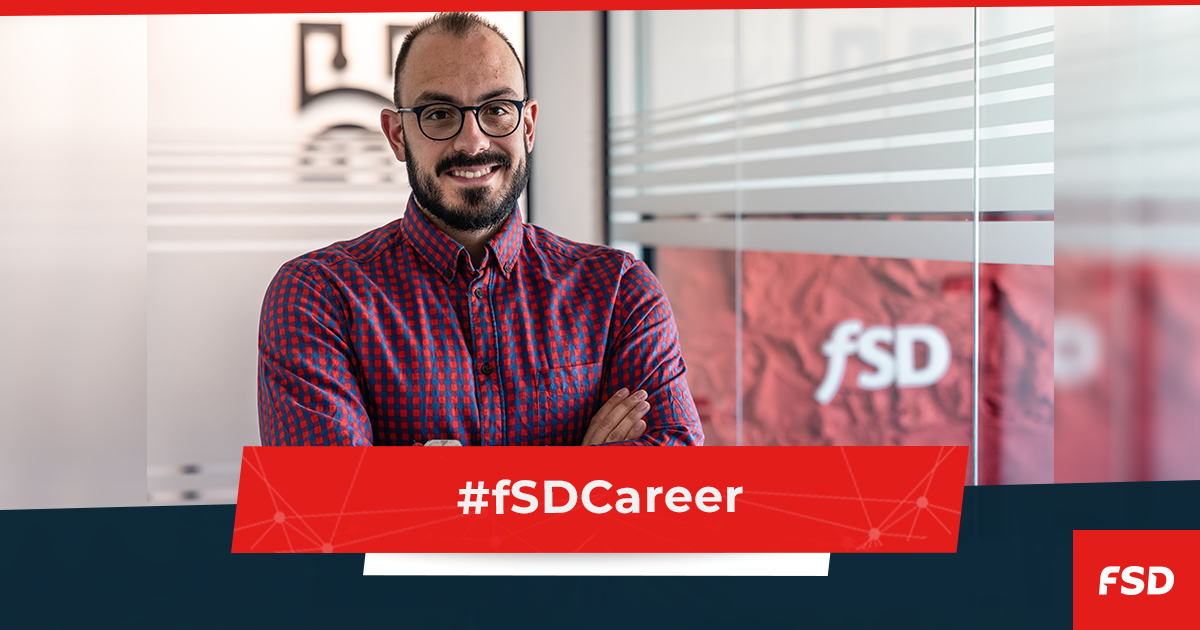 The rumour has it that not many developers would like to try out managerial skills at any stage in their corporate ladder. However, there are still those who once try it and they turn out to have a big knack for it. As one such example we would like to introduce you to Vukasin, our Project manager and JavaScript Developer. What is more, he fulfils many other roles by being a father, a husband, a developer and last but not least, a hard worker and a big dreamer.

How come did you end up at fSD?

First of all, I was looking for new challenges and a more dynamic work. Secondly, I have always longed for coming back to Novi Sad, to be its resident once again as in the good old days. Actually, Novi Sad is not my hometown, but in this case the combo of a place where I finished my studies and got the job opportunity sounded promising and more than welcome in my case. It was not an easy way, even 4 year ago. IT hype was on and I tried many times just to get a chance. A lot of NOs with “lack of experience” was a huge barrier, but I was eager to find my place in the IT sun. From this perspective, FSD was a perfect match after a lot of interviews and a lot of homework.

What triggered your professional orientation development towards programming?

From the very beginning it was more than obvious that I was passionate about figures. I have always loved mathematics and have deftly handled every mathematical task during formal education. As a result, I enrolled Faculty of Technical Sciences, from which I graduated with ease. I am an analytical person, capable of thinking critically and solving problems. In a nutshell, I do possess an engineer’s brain. After studies I was working as a standardization engineer. However as time was passing by I was being drawn toward programming, where the surroundings is much more dynamic and there are a great deal of advancement opportunities.

Did your career path to follow in the footsteps of your original ambition?

Definitely, it did. In the beginning, everything was as I originally planned. Later on, I had to step forward, maybe a bit hastily, in order to grab the great opportunity, by accepting the position I am now in. This turned out to be rewarding and helped me climb up the corporate ladder.

How far did you move away from the initial JavaScript programming? Should the answer be ― a lot, do you miss it?

It certainly shifted my entrepreneurial focus in some other direction. Now when I think through, I can admit that I miss it only partially. Many would probably think of a managerial position as being something mundane, but it actually involves strategic planning and coming up with innovative projects. Simultaneously, I can devote some of my business schedule to dealing with programming tasks. In this manner most of my professional goals can still be accomplished. The idea pops up in my mind from time to time. However, in order to make up for it, I do some programming occasionally.

Would you say that you are satisfied with the outcome so far and would you do anything differently if you had a chance to reconsider your previous decisions?

I am definitely satisfied but some more years of programing before becoming a team lead would not have harmed at all. When it comes to my achievements, there is always something that I would have done differently but I prefer not to look back, ever. In the end, I would like to give a piece of advice for all those potentially interested in an IT world — start programming as early as you can. It will save a lot of your time and energy for what is to follow in the business.

BalCCon2k19 and interview with pcdog at our place Career starter

You are subscribed to our Newsletter!
We promise not to spam you.